With the new Spider-Man Movie Spider-Man: No Way Home hitting theaters in just a few weeks, we know fans are itching to get their hands on any related material they can. The newest addition to the Marvel Cinematic Universe picks up right where we left Peter Parker in Far From Home. His identity has been revealed and he’s dealing with the fallout of it all. The two trailers for the new Spider-Man movie pack so many bits of information in them that Marvel has fans wildly speculating the tiniest of details. 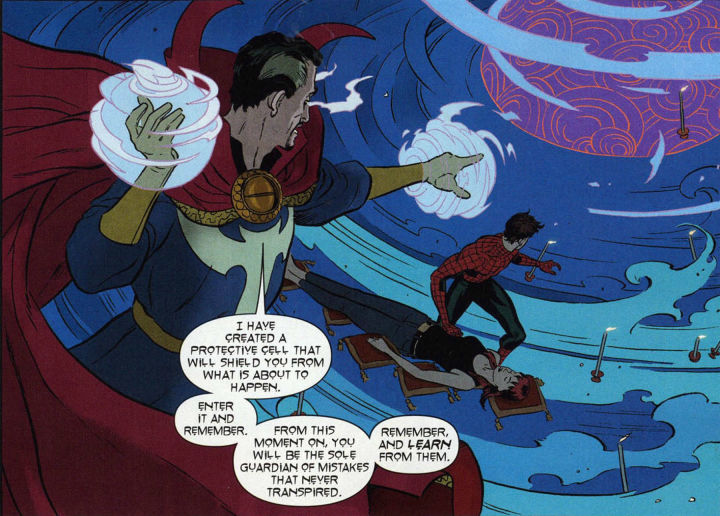 Image via IGN by Paolo Rivera

From the trailers, we know that some beloved Spider-Man villains from previous movies will be making appearances thanks to Peter Parker and Stephen Strange’s multiverse-altering shenanigans. There’s speculation that more than Spider-Man villains are crossing over from different universes. Rumors continue to fly that we may see Tobey Macguire and Andrew Garfield reprise their roles as Spider-Man. We also know that the spell that Strange casts is meant to wipe everyone’s memory of the fact that Peter Parker is Spider-Man, but it didn’t seem to work on MJ or Ned. There’s the dreaded scene of MJ falling in a very Gwen Stacy-esque way, and a fight scene at the Statue of Liberty that seems to at least pay homage to the final battle at the end of the very first X-Men film.    So many goodies to latch on to for both movie and comic fans alike, but the new Spider-Man movie doesn’t seem to be directly inspired by any one storyline that Marvel has published, which can make it hard for fans who want more. Have no fear though! There are plenty of comics to read that can get you hyped to see the new Spider-Man movie or fill the hole it creates after you’ve watched it.

At the end of Spider-Man: Homecoming, the movie makes a nod to the moment Spider-Man reveals his identity that helped spark the events of the comic version of Civil War when Tony Stark prepped Peter for a press conference so that he could officially join the Avengers. Ultimately, revealing Spider-Man’s identity didn’t pan out the same way in the MCU as it did in the comics, but both came with hefty consequences. Some of which we’ll witness on December, 17th 2021, but if you want to know what happens when Spider-Man reveals his face in the comics then pick up the back issues or trade paperback of Civil War.

One of the consequences that Peter faces in the comics is explored in the Spider-Man storyline One Day More. The story is encapsulated in four issues: Amazing Spider-Man #544, Friendly Neighborhood Spider-Man #24, The Sensational Spider-Man (Volume 2) #41, and  Amazing Spider-Man #545. The story starts with Aunt May in the hospital, shot with a bullet intended for Peter and in very bad condition. In a desperate attempt to save his beloved Aunt, Peter is on the hunt for a solution, going to anyone he knows to help but to no avail. Who does he turn to when he has nothing left? One Day More has the answers. It could also be one of the most disliked storylines of the comics, but if you’re a fan of the crazy theories surrounding the new Spider-Man movie then it could be worth checking out.

One Moment in Time is another four-part Spider-Man arc, spanning across Amazing Spider-Man #638-641, that explores what changes had to be made to keep Aunt May alive after One Day More. It also isn’t a very well-received storyline, but it does have a scene where Peter Parker looks to Doctor Strange for a spell to make everyone forget like what has been teased in the new Spider-Man movie. While the stories were not well-reviewed at the time of their release, they fuel current storylines in the Marvel comic arcs and lend some credence to the Mephisto theories that are being thrown around. 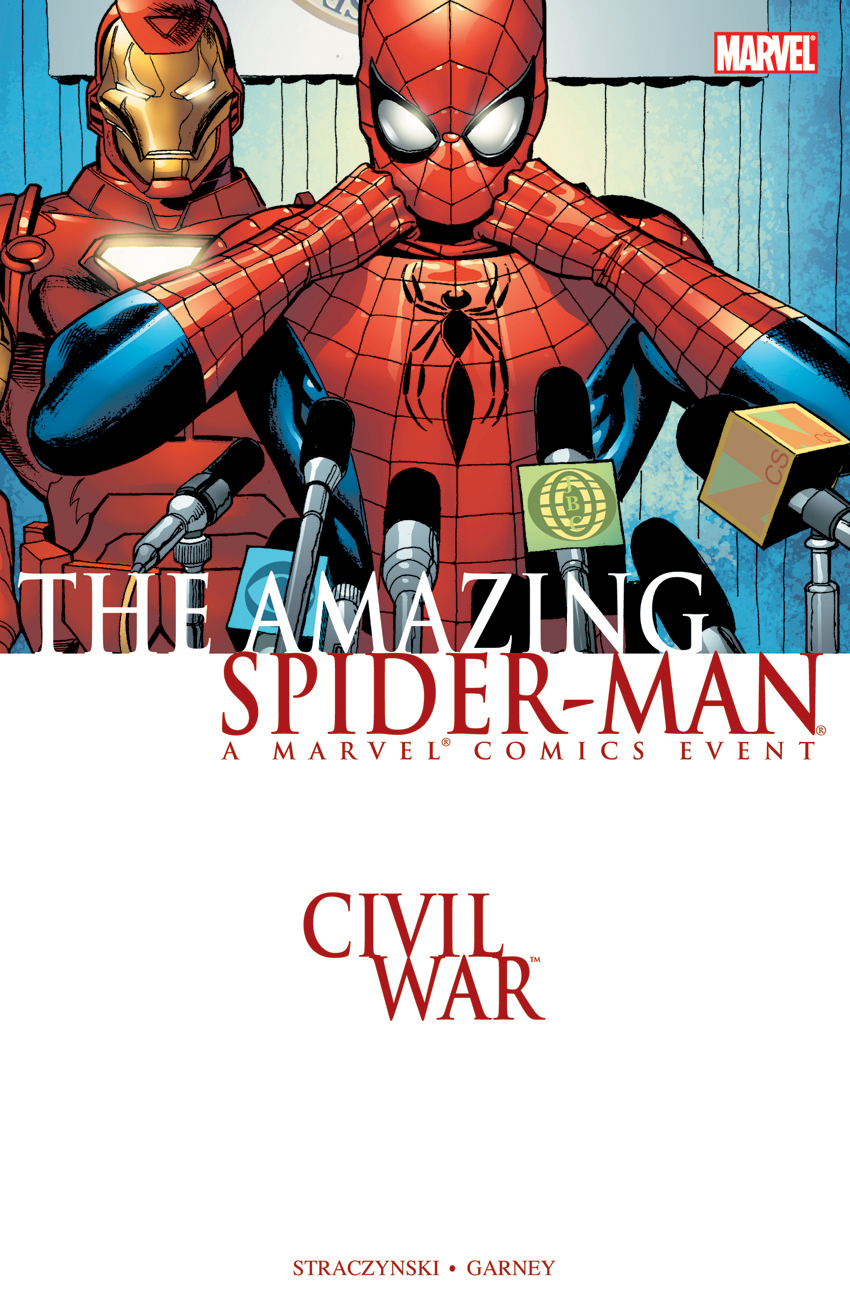 Image via Marvel by Steven McNiven

During their handful of interactions in the MCU so far, Spider-Man and Doctor Strange have built a repertoire that is nothing short of charming, and we can’t wait to see more of it in the new Spider-Man movie. Tom Holland has a sort of naivety about his Spider-Man that pairs well with Benedict Cumberbatch’s dry humor. It’s fun to watch, and it’s easy to imagine that fans would want to see and read more of the pairing. 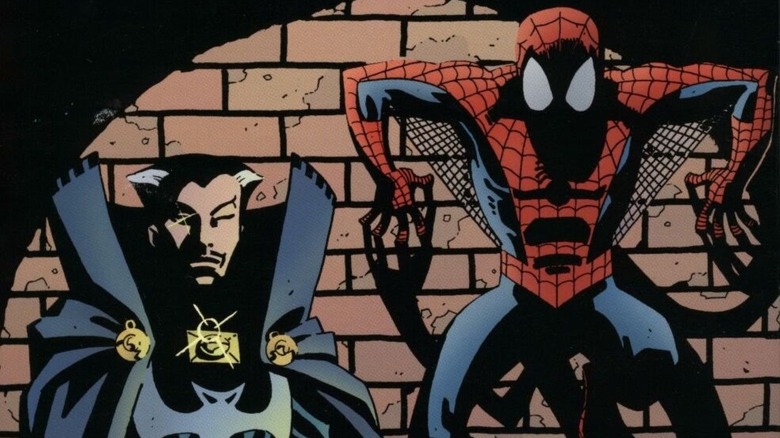 Luckily, the two have teamed up many times in comics. A chunk of their team-ups entails the pair dealing with the sorcerer Xandu, whose life mission is to try to save his wife. They also team up to deal with a series of well-known Doctor Strange and Spider-Man villains, including such characters as Baron Mordo and Wraith. Fans can catch these stories before Spider-Man: No Way Home by picking Amazing Spider-Man Annual (1964) #2 and #14, Marvel Team-Up (1972) #21 and issues #50-51, #76-77, #80-81, Untold Tales of Spider-Man: Strange Encounter, Marvel Fanfare (1982) #6, and Spider-Man/Dr. Strange: The Way to Dusty Death.

If you want more of the multiverse, Jonathan Hickman’s Secret Wars is a great option to pick up. It explores some popular Marvel alternate universes seen in series such as Age of Apocalypse, House of M, Marvel 1602, and the universes of Marvel 2099 and Ultimate Marvel. Secret Wars also created the planet Battleworld which exhibits various aspects of each universe in different areas of the world. Battleworld is home to a peacekeeping patrol of the different versions of Thor and Stephen Strange serves as sheriff of the planet to God Emperor Doom. The series has multiple tie-ins and is still very well received. 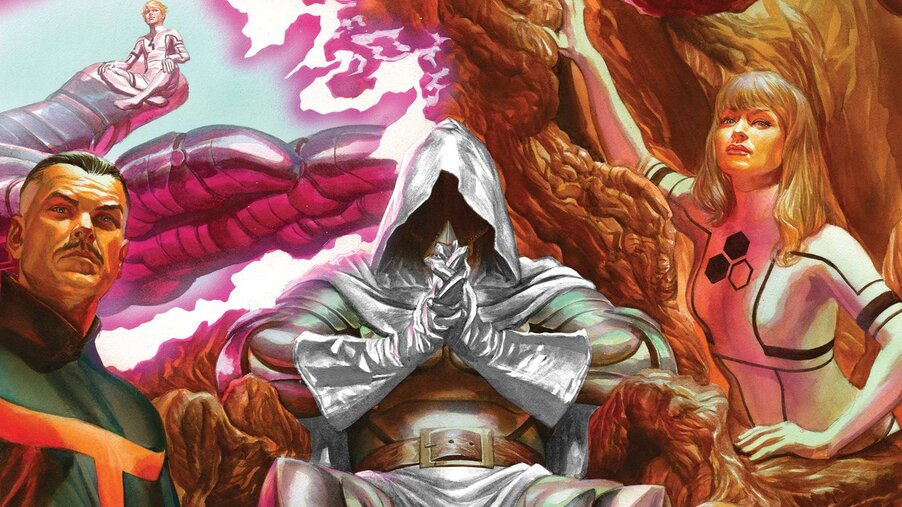 While it doesn’t contain Peter Parker, any Spider-Man villains, and doesn’t pertain to the new Spider-Man movie, it does give us a glimpse into the other universes that may one day make their debut in the MCU.

Where to Find More Recommendations

If you’ve already read these or are just looking for more after seeing the new Spider-Man movie, stop into your local Coliseum of Comics to find more! We can help you navigate the vast array of Spider-Man stories out there to help find the best comic for you.