A Look at Last Week: We Ride Titans #1

Giant robots fighting giant monsters. It’s a formula that often leads to success. Though much of that success has been found in Japanese media. Anime, such as Gundam and Evangelion, feature mechas that have become iconic in pop culture throughout the world. Kaijus, aka giant monsters, have also seen their fair share of love on screen with dozens of Godzilla movies that have a cult-like following. But, mech made in America has always had a hard time really taking off with the genre’s arguably greatest success came with Pacific Rim, which didn’t even break even during its North America release. The movie had a lot going for it too. Guillermo del Toro was the director, it had solid actors, and plenty of monster-on-robot violence. Internationally, it was a success. So, why didn’t it work in America? Was it the medium? Perhaps. Are comics able to break this curse? Let’s take a look.

Vault Comics released We Ride Titans #1 last Wednesday. A book about kaiju, mechs, and family. The story follows Kit Hobbs, who readers find out is estranged from her family. Readers are left to wonder why, but they do know that the Hobbs operate a mech that protects the city of New Hyperion from attacking monsters and that Kit’s brother Dej may have a bit of a drinking problem. It seems that it’s all up to Kit to keep her family and their role as protectors of the city from falling to ruin. 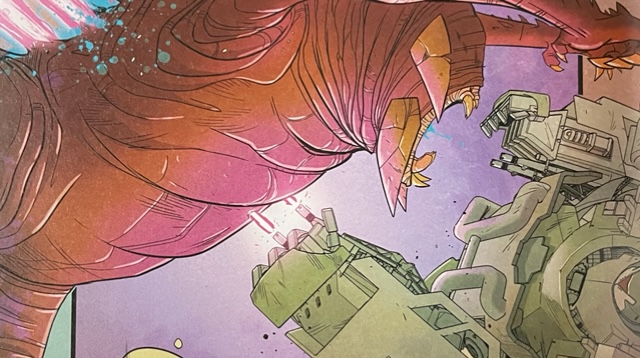 Sound a little like Pacific Rim meets Fast & Furious? It kind of is, but it’s not ultra-heavy on the Fast & Furious vibe, which is a blessing. Readers won’t find the cheesiness that some have come to be associated with the Fast franchise. Instead, they can find a sincere portrayal of family obligation and hardship with the backdrop of giants fighting. The first issue is a little light on Kaiju, but the story is engaging and does a good job of planting questions in the readers’ brain to keep them coming back for more. 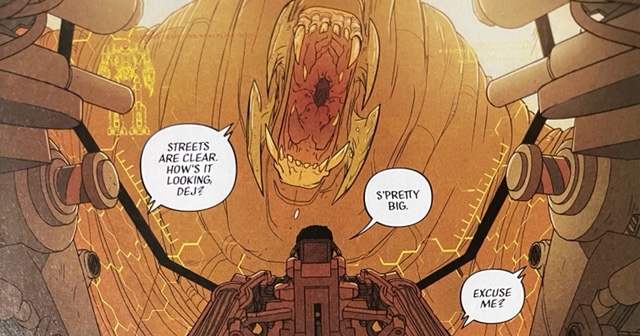 Is this comic the comic to break the American mech curse? Only time can really tell, but the book has an uphill battle in front of it. It doesn’t have the big two backing its name, but there are plenty of creator-led projects that have stolen the limelight for short periods of time. There hasn’t been a comic yet that has been able to do it. While it may not break the curse, it’s definitely a read to be picked up if not for the sure-to-be touching story of family then the ever-entertaining mechs vs kaiju.

If you didn’t get a chance to check out the first issue of We Ride Titans, pick it up this week! Vault Comics is a hidden gem of a publisher with tons of compelling stories, and this title doesn’t seem to be an exception. Ask the folks at your local comic book store if they still have copies, be sure to it on your subscription list, and ask about similar titles.